A Stranger Came Into Town 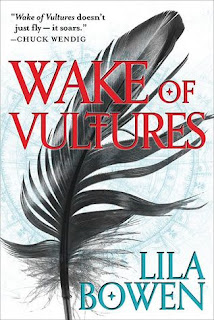 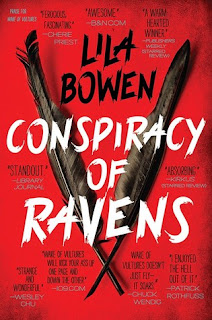 I grew up watching Westerns.  There was a time that TV was desperate for cheap things to air, & old shows and movies from the 50s fit the bill.  That meant war movies & westerns.  So you could say that I have fully absorbed the tropes of the genre.  And I have to admit that I still love a good western.  Now the problem is that there’s a lot of problematic stuff baked into the genre.  Racism, sexism, manifest destiny, the list goes on & on. So how in the world can a social justice warrior enjoy themselves a good oater?

Lila Bowen has certainly figured out a way. Her Shadow series (currently consisting of Wake of Vultures & Conspiracy of Ravens) features a biracial protagonist who just so happens to be a trans man. She’s friends with Native Americans, immigrants, & even a couple of people who could be in the cast of a traditional western.

Wake of Vultures introduces the story & is a coming of age story.  Nettie Lonesome runs away from her “home” & eventually finds out that she is so much more than she could have even imagined.
The down side is that Wake ends in a hard cliffhanger (literally).

The good news is that Conspiracy of Ravens picks up where Wake leaves off.  We follow the transformation of Nettie into the eventual Rhett Walker, a Ranger who hunts down monsters.
Now it’s hard to just the flow of a series without having read all the books, but there does still seem to be a mid of mid-series flab in Conspiracy. There are new characters, new aspects to the world, but some fundamental questions still unanswered.

Rhett’s not my favorite person, but I read him as being in a continuum of western anti-heroes.  There’s a strong tradition of bad men doing good things (think Clint Eastwood). Rhett’s world is dangerous & kind of awful.  We certainly see a lot more people in misery than happy people.

I really enjoyed both of these books. If you are a fan of weird westerns, you should definitely check them out.
Posted by Burgoo at 1:47 PM