The Sport of the Future 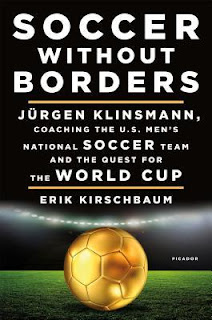 The first thing that needs to be established is what exactly is this book? Personally I was expecting an examination of Klinsmann as coach, with some engagement of the various controversies that have happened in Germany & the US.  That’s not really what this book is.

Erik Kirschbaum is an American journalist who has lived and worked in Germany for some years. The combination of those factors has allowed him to have a friendship with Klinsmann, and to get his perspective on quite a few things.  So this book ends up being more of an authorized biography than any real sort of critical examination of Klinsmann as a coach.

Kirschbaum goes a good job of telling the story of Jurgen Klinsmann as a player who then moves on to multiple high profile coaching jobs.  Along the way, the story itself shows why Klinsmann has certain preferences and biases. I felt that I also learned quite a bit about the history of the Bundesliga and the overall structure of German sport.

The shortcoming of Soccer Without Borders is in the book’s refusal to truly engage with any of the controversies in Klinsmann’s coaching career.  For example, while there is a (very short) chapter on Landon Donovan & his exclusion from the World Cup squad, there’s no real engagement with the issue.  Now I don’t expect that a book that is so clearly a functional mouthpiece for Klinsmann to be critical of his decisions.  But we aren’t even given Klinsmann’s side of the story.  We are left with a brief overview of the situation, and a sense that some people were upset that Donovan was omitted from the squad.

That’s a consistent pattern once the book gets to Klinsmann as coach.  Certain controversies will be acknowledged as existing, but never really explained.

I’d say that Soccer Without Borders is for newer USMNT fans who want to know about the background of our charismatic German coach.  It does a great job of giving insight into Jurgen Klinsmann’s history and motivations.
Posted by Burgoo at 8:49 AM No comments:

Ultimately Guy turned out to be my favorite out of all those Texas songwriters.  Never the most prolific, he viewed writing songs as a craft more similar than not to building the flamenco guitars he worked on.  Maybe 15 albums total, which isn’t that much when you start recording in 1975.  Every 2 or 3 years he’d send out another one, each one with gems.

Maybe most of all I appreciated how Guy’s songs celebrated everyday life.  Food, friends, stuff that works.  It’s rare to find an artist who explores domestic life through a distinctly masculine perspective, and Guy was one of the few.  He celebrated the good times and mourned the bad.
There are lots of songs about Mama, but not so many about Dad.  Dad songs tend to be like “A Boy Named Sue”, where it’s really all about Daddy issues cause Daddy was awful.  But songs like “Desperadoes Waiting for a Train” or “Randall Knife” celebrate meaningful intergenerational relationships, the mentoring of a young man and the appreciation for that role model. It’s deep stuff, and overlooked in today’s world.

Women he loved & lost. Of course his relationship with Susanna became somewhat legendary in Americana circles.  And he dutifully wrote songs like “My Favorite Picture of You”.

For lighter fare, there was always room for songs like “Texas Cooking” or “Homegrown Tomatoes”.  Three minute celebrations of the joys of everyday life. (And the humid sounds of those early records also brings comparisons to Jerry Jeff Walker and even Jimmy Buffett to mind).

Last but not least, for everyone who’s ever hated Los Angeles, there’s always “LA Freeway”, maybe the ultimate get me out of here song.
Posted by Burgoo at 9:55 AM 1 comment: