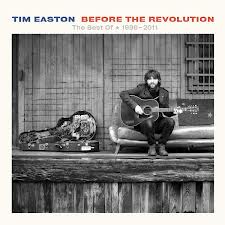 It’s always a bit of surprise to me to see a “best of” compilation from an artist that I’m only marginally aware of.  I’ve listened to a couple of Easton’s albums, but those are from the last couple of years, & quite frankly I had no idea that he had released such a body of work.

This compilation is pulled from seven albums he released on New West over the last decade or so.  He’s spent that time relentlessly touring, & hitting the studio to record new material.  Today his website shows tours in Japan and Europe as well as Alaska and the continental US.  He’s a busy man.

So what do we have here?  The tracks on Before the Revolution do show a bit of stylistic variety as you might expect.  The core sound is that of a singer songwriter. But he also shows plenty of classic rock influences, as well as those of 90s post-Elliott Smith songwriters.

The folkier material works best for me, as I would expect.  But the range he shows is quite impressive.  I think I’ll be tracking down more of his albums.

Email ThisBlogThis!Share to TwitterShare to FacebookShare to Pinterest
Labels: album of the week, music, tim easton 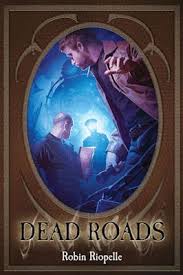 Sometimes a book can really surprise you.  I expected Dead Roads to be a fairly straightforward urban fantasy story, with a bit of Cajun flair.  What I got was so much more than that.

The story is centered on three siblings:  brothers Sol and Baz, and their estranged sister Lutie.  Sol, who has followed his father on the path of the traiteur, is investigating suspicious deaths along a railroad line in the Great Plains.  We learn that a particularly vengeful ghost is responsible for the deaths, and that only by all three siblings working together will this ghost (and the small demon controlling it) be vanquished.

What follows is a gritty ghost hunt, as the siblings travel along the railways to investigate and battle with the ghost.  It must be said that the ghosts of Dead Roads are not what you might expect.  They are angry bitter badasses who can easily do physical damage to a person.  Closely bound, as a fortune teller might do, they can cause insanity and death.  Even proximity to a large number of ghosts can make someone physically ill.

What really makes Dead Roads work so well is the characters.  Riopelle creates three strong central characters, and clearly establishes the relationships between them.  The reunion of the siblings is at the emotional center of the book.  I found this unexpected, and surprisingly moving.  While the brothers have grown up together, their sister was taken from them at an early age, and only blurry memories remained.

Dead Roads is a strong assured first novel.  Its emotional depth is quite surprising given how you may perceive the book in terms of how it fits in genre.  I’m looking forward to reading future efforts by Riopelle. 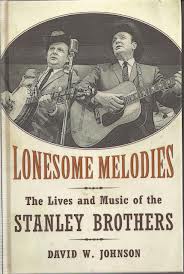 There’s a curious void at the center of Lonesome Melodies.  Strangely enough for a biography, that void is the Stanley Brothers themselves.

The strength of Lonesome Melodies is the facts themselves.  Johnson does a great job documenting session information, myriad band lineup changes, the migratory nature of the early bluegrass music scene, and other minutiae of the Stanleys career.

Unfortunately this is all delivered in a dry academic tone, making the reading experience less than enjoyable.  At times it is like reading a more fleshed out version of the liner notes to a Bear Family box set.

More egregious, however, is the lack of insight into the subjects of the book itself.  If the purpose of the book is to function as anything more than a (very expensive) discography, then the reader should gain a greater understanding of the Stanley Brothers.  Other than reaffirming the impression of Ralph Stanley as “tight lipped”, I can’t say that I have any additional insight into Ralph or Carter as men.
There were numerous opportunities to examine their character through anecdotal evidence, yet those incidents were slighted and quickly moved away from.  For example, in the early days of the band, the Stanley Brothers apparently aggressively stole material from other more successful acts (most notably Bill Monroe).  This caused serious rifts with other musicians.  Yet Johnson refuses to examine this behavior.  The facts are presented, and nothing more.  What were the other musicians’ feelings about this?   How did they see the Stanley Brothers in light of this behavior?  Why did they do it?  And how and why were these rifts eventually healed?

Making this facts without interpretation approach worse is Johnson’s tone.  He writes in a dry academic style, which while useful in making the details clear also makes Lonesome Melodies a long slog of a read.  This is not a book that will captivate readers not already fascinated with the music of the Stanley Brothers.
Posted by Burgoo at 3:31 PM No comments: 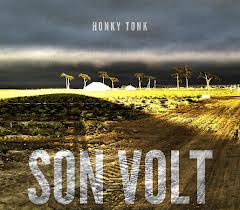 You may have read some of the writing on this album already.  Most of the articles go something like this:

Let’s unpack this for a minute.

First of all, why mention Uncle Tupelo?  It’s been 20 years since their final album.  I’d guess that all of their fans know that Tweedy formed Wilco and Farrar formed Son Volt.  If Farrar was a career sideman, then letting people know his past might be helpful.  But he wasn’t.  He was a primary songwriter and singer for that band.  Uncle Tupelo fans know who Jay Farrar is.  And new fans?  Are there new fans of Uncle Tupelo?  At this point I don’t know when I’ve heard anyone under the age of 40 mention them.  (And the over 40s don’t exactly talk about them all the time.)  I seriously doubt that these alleged new fans even exist.

Secondly, the Bakersfield talk is just garbled reiterations of promotional hype.  In interviews, Farrar has talked about taking a recent interest in the pedal steel guitar, specifically in Ralph Mooney’s playing.  Mooney played extensively for Merle Haggard in the 60s, so that’s how Bakersfield gets in the mix.  But in my mind, the Bakersfield sound was created more by the telecasters of Don Rich & Buck Owens than Mooney’s pedal steel playing.  (That’s not to take anything away from Mooney.  He helped make Haggard & Waylon stars.  He’s clearly on the short list of great pedal steel players.)
But Honky Tonk doesn’t really sound like a Bakersfield record.    If anything, the emphasis on ballads & waltzes make it seem more derived from the Ernest Tubb Texas tradition.  It doesn’t have that poppy influence that Buck Owens popularized in the 60s.

On to the third point, “this is the best album since X”.  Maybe.  Somehow these sorts of statements always remind me of Dylan talk, where every album is the “best since Blood On the Tracks.  Honky Tonk is a really good album.  One of Farrar’s weaknesses has always been melody, or the lack thereof.  By integrating pedal steel and fiddle, Farrar has found a workaround.  His vocals are still the same, and tend to be monochromatic.  But the country elements bring melody into the mix.  It livens up his sonic palette, & is a change for the better.
Posted by Burgoo at 2:53 PM No comments:

Email ThisBlogThis!Share to TwitterShare to FacebookShare to Pinterest
Labels: album of the week, music, son volt

Album of the Week: Bonnie “Prince” Billy & Dawn McCarthy “What the Brothers Sang” (2013) 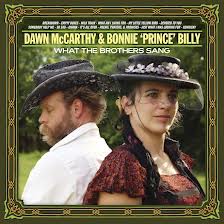 “Happy Days” ruined the Everly Brothers for me.  For many many years I thought of their music simply as more of the insipid bland rock & roll from the shows soundtrack (“Wake Up Little Susie”).  It wasn’t until after I was an adult that I learned how they fit into the country (and rock) traditions, the links to earlier acts like the Louvins and to rock acts like the Beatles and the Beach Boys.  Only after all that did I go back & really listen to some of their recordings, and discover what I had been missing.

Growing up in Kentucky, Will Oldham had a different exposure to the Everlys.  They’re considered much more of a big deal, and for years there was a music festival held in their honor in Western KY.  So it’s not surprising that he has fond childhood memories of their recordings.

Dawn McCarthy has worked with Will Oldham before, most notably on 2006’s The Letting Go.  That recording is a quiet masterpiece that highlighted the interplay of their voices.  Given that track record I was enthusiastic about the potential for this Everly Brothers project.

The primary challenge of recording an Everlys tribute is how to handle the vocals.  Coming from the brother duet tradition, the Everlys practiced a subtle yet difficult technique of synching vocals while harmonizing.  Some claim that due to differences in speech and breathing patterns it is almost impossible for singers who aren’t siblings to duplicate this style.

Their answer is to not attempt to duplicate the Everly Brothers.  Rather, they interpret the harmonies in their own way.  Sometimes Oldham and McCarthy are singing together, other times they are alternating, often within the same line.  Given their ability to harmonize, this choice works well.  While not being a true copy of the original material, it is true to their own style.

Another good choice was made with the material.  Rather than approaching from a “Greatest Hits” perspective, What the Brothers Sang ignores many of the biggest hits to linger on some deep cuts.  And perhaps more surprisingly, they focus on an often ignored time period of the Everly Brothers career-- the late 60s.  There’s a relaxed sunshine pop jibe to most of these recordings.  It provides a warmth that mirrors the warmth of their harmonies.

Placing this album in the context of his career, I would say that What the Brothers Sang is a mix of Greatest Palace Songs with a hint of The Letting Go.  Highly recommended for fans for Bonnie “Prince” Billy or the Everly Brothers.
Posted by Burgoo at 8:38 AM No comments: