The Gotham You Need 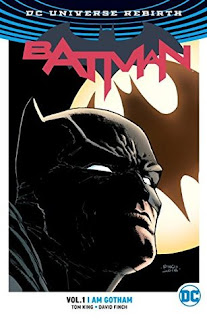 After Omega Men & The Vision, I am just about convinced that Tom King is the best writer in comics today.  Definitely he is the hot name.  The buzz kid.  The one that people seem to be excited about.

So here he is on Batman.  In a sense it’s an odd strategy, why put the hot talent on the book you know will sell regardless?

With Snyder’s Batman being more or less the only part of the line that isn’t being retconned by Rebirth, King has a bit more room to play.  While Snyder’s Batman was a horror comic, the character was still close to the mean.

I think of King as being more of a formalist (think about what feels like the heavy use of a 9 panel grid), yet here I think that he is channeling more of his inner Grant Morrison than his Alan Moore.  King’s Batman incorporates more of the Silver Age Batman, with a reliance on Alfred and plenty of Bat gadgets.  Even the names of King’s guest stars (Gotham & Gotham Girl) seem to scream 60s pop art.

I’m not really a fan of David Finch’s art.  It seems a bit overdone and prone to excess.  It feels like he’s trying to reign it in on this book, but really the art feels pedestrian at best.  I think that the double shipping schedules just aren’t conducive for great art.

Right now any book with Tom King involved is a must read.  Batman is no exception.  This clearly feels like the start to his run on this title, and I am excited to see where he is planning to take Bruce.
Posted by Burgoo at 3:56 PM