Well That's Something I won't have to do again 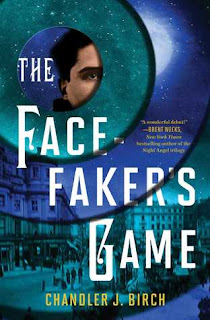 This is being heavily touted to fans of Scott Lynch and Patrick Rothfuss.  Since both authors are very popular and rather slow writers, I can understand the marketing department.

And the similarities in plot are easily apparent.  A young man (a la Kvothe) who lives on the streets and survives by his wits, cheating, stealing, and fleecing the citizens around him (a la Locke Lamora et al).

That’s more or less where the similarities end.

I don’t mean any offense to Mr Birch, but his skills as a technician or a world builder just are not comparable to Messrs.’ Lynch and Rothfuss.

This is a great example of a fantasy that feels as if elements were included because of the cool factor, or because there was a desire for a specific scene or affect, yet make no rational sense.  Remember, just because the world is imaginary, it still has to follow logical rules.  And quite frankly this one didn’t.
Posted by Burgoo at 1:20 PM