Every Creature is Given Both a Place and a Time 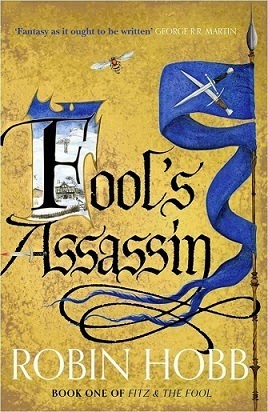 
(spoilerific, read at your own risk)
Unlike what seems to be the rest of the world, I have not read any of Robin Hobb’s earlier books.  I know.  No, I don’t really have an excuse.  I just never got around to it.  So I was psyched to get an opportunity to read an ARC of her latest.

And I loved it.

Fool’s Assassin won’t be for everyone.  It is primarily a quiet domestic tale set in a fantasy world.  Fitz/Tom is retired and living on a country estate, happily married.  But I was transfixed.  Hobb’s skills as a writer shine, and the world is rich and vivid.  AND THE FEELS!  Maybe it’s because I have a newborn, but the relationship between father and child is so wonderful and real.

Of course I have to mention an interesting stylistic detail of this novel.  By alternating POV between Fitz/Tom and his daughter Bee, Hobbs has functionally written both an adult and a YA novel.  Or is it that a YA novel is nested inside an adult novel?  Regardless, it is intriguing and something that I’ve never encountered before.

Of course the plot does pick up (significantly) at the end.  And now…. I CAN’T WAIT FOR THE NEXT VOLUME!!  Yeah, I’m a big fan now.
Posted by Burgoo at 8:56 AM No comments: 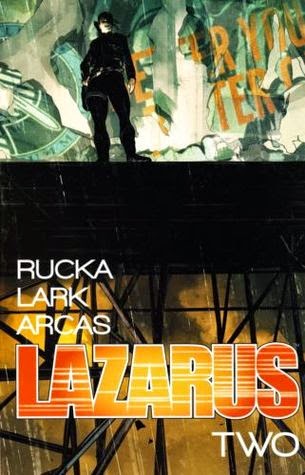 Apparently the Lift is when someone can be elevated to being in the employ of a family.  So we meet a farming family who are forced to leave their land, Grapes of Wrath style in the hopes of improving their fortunes via the Lift.

My God the future of Lazarus is depressing.  As the story goes on it becomes more and more obvious that this future is a terrible place to live – for everyone.

While I have to honesty say that Lazarus is not exactly fun to read, it is clearly one of the best comics going.  The combination of characters, world building, and action is unmatched.  If you are interested in where the medium is today, you should be reading this book.
Posted by Burgoo at 9:49 AM No comments:

Personally I'm glad my Grandmother never gave me a sexbot 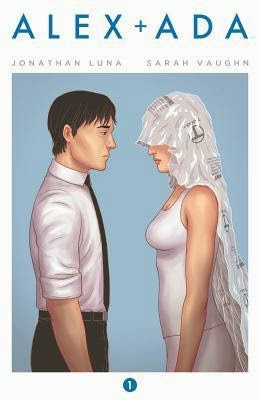 Alex is an office worker in the near future.  We don’t know exactly what he does, but he does have a nice private office.  He’s depressed and lonely.  And so his wealthy (and creepy) grandmother gives him a sexbot.  OK, that’s not what they call it, but it’s pretty clearly what it is.  But don’t worry, granny has one too!

Alex is a good guy, & he’s really uncomfortable with this situation.   It particularly bothers him that his sexbot Ada (he has named her himself) has no decision making abilities of her own.  So Alex does what anyone would do, namely meet up with some sketchy people on the internet & illegally unlock Ada.

This is just the first volume of the comic, and quite frankly it feels like it.  The story is simple and feels more like the setup than and real independent story arc.

I think that perhaps the more interesting question is why is this a comic?  When I think of the things that comics do well, this story has none of those elements.  It’s a small story that could easily be told on television with minimal special effects.  It’s more of an interior piece with the real “action” being the emotions of Alex (and potentially Ada, I suppose).  There’s a lot of static poses and scenes of simply conversation.  Perhaps, then it’s an end run for a screenplay, at a time when properties derived from comics are so hot.

I think that the reader’s level of enjoyment with vary with their identification and sympathy with our two title characters.  And to be honest, in this volume, Ada is barely a character.  Thematically, it’s difficult to judge because the book feels like it is just beginning.
Posted by Burgoo at 8:52 AM No comments: