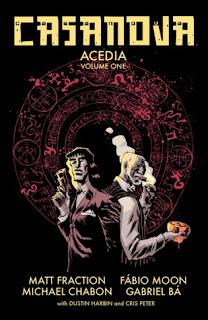 Matt Fraction, Michael Chabon, Fabio Moon, & Gabriel Ba, “Casanova: Acedia Volume 1” (Image, 2015)
Fraction’s interdimensional superspy is here on Earth – a version of OUR Earth.  He’s an amnesiac, working for another amnesiac superspy.  There’s some sort of occult group of assassins who are after one or both of them…. Hey what the hell is happening?  Cassanova Quinn doesn’t know, & neither do I.  From reading reviews, neither does anyone else.

This story is violent and sexy and weird.  It kept reminding me of Moorcock in ways I can’t quite put my finger on.

There’s a running backup story written by Michael Chabon that’s really no clearer than what you’ve been reading by Fraction.

Somehow through the confusion I found all this to be quite compelling.  I want to know what’s going on. What’s happened & what is going to happen.  On that level, this is quite a success. 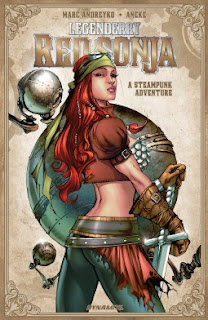 Marc Andreyko & Aneke & Juanan Ramirez, “Legenderry Red Sonja” (Dynamite, 2015)
Sometimes the elevator pitch tells you exactly what you need to know.  In this case, it’s Red Sonja and the Bride of Frankenstein fight Dr Moreau. And it’s set in a Steampunk milieu.

Either that sounds great fun, or not.  If the answer is not, this is not the book for you.  For everyone else, this book is a lot of fun.

The art is light and a touch manga inspired.  It keeps the story from getting too dark—after all there’s plenty of necromancy powered by SCIENCE! that could drag things down.

On the whole, this doesn’t really measure up to Gail Simone’s recent work on Red Sonja, but it’s still a lot of fun.