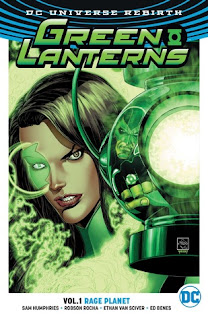 The good news is that I think I like these new Lanterns.  They seem to have some interesting personal stories and personalities.  I like how they are trying to work together, even though it is difficult. There’s some real potential here.

The bad news starts with all this Red Lantern bullshit. I was really hoping that all this would be left behind in the Nu52.  I mean red vomit Lanterns is about the most Xtreme 90s concept out there.  It is just so awful and stupid.  So of course the Red Lanterns get as much page time and our actual, you know, Green Lanterns.

DC, you’ve got some good characters here, don’t screw it up by putting them in the most XTREME storylines you can dream up.  Leave all that colored nonsense behind & just write some cool space cop stories.
Posted by Burgoo at 2:10 PM No comments:

Not Really Better Than Batman 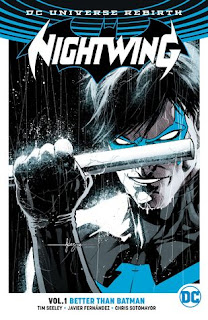 But what about the book? How is it?

While this is part of the line wide “Rebirth” reboot, it doesn’t really feel like it.  Sure, there are some changes since Dick Grayson was a spy, but that’s a normal sort of change in funny books. So Dick’s back to being Nightwing. And he’s picked up a frenemy, who has been placed there by the Court of Owls.

So immediately we are dealing with another secret society (an ongoing theme in the Rebirth books), as well as another Batman analogue.

It’s not that any of this is bad, per se.  It just doesn’t provide either a classic look at the character or a fresh look.  Quite frankly it feels a little under baked and tired.

The art, like so much I’ve seen is also a bit lacking.  Not that it’s bad, it’s just nothing I would be excited about.

This is perfectly fine if you are a Nightwing fan.  But the character deserves better than that. Maybe a creative team with some exciting ideas.
Posted by Burgoo at 1:54 PM No comments: