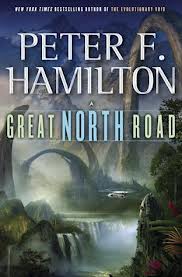 The Great North Road begins as a police procedural, when the body of a rich clone is found in Newcastle.  The investigation shows startling similarities to a murder committed years earlier off world, leading to an exploratory expedition to find and neutralize a deadly alien.

Most of the story is told in parallel, with the police investigation switching back and forth with the alien expedition.  Hamilton uses his two primary POV characters to lead us through their respective storylines.  Sid Hurst is the lead detective investigating the murder in Newcastle.  He’s a career cop, & while a bit flawed (it seems that the entire police department is on the take from someone), he’s a sympathetic character.  Angela Tramelo is the POV character for the alien sequences.  She’s a convict, found guilty of the earlier murders, who is released after the present day murder takes place.  Her own story is one of privilege and betrayal, intrigue and revenge.  I found it provided the most insight into Hamilton’s world, and yet Tramelo herself was decidedly less sympathetic than Hurst.

Somehow The Great North Road feels like much more than the sum of its parts.  Don’t get me wrong, the parts themselves were enjoyable & well executed, if not the strongest examples of their type.  The police procedural was a bit below Stross’ Halting State novels.  The alien hunting expedition was often reminiscent of Predator.  Still, the detail and thought of these storylines made for a compelling and very enjoyable read.

The Great North Road is a big book.  Big in length as well as story.  There are numerous flashbacks and subplots to be explored.  But if you are willing to put in the work, you’ll find it to be one of the best SF reads of the year.
Posted by Burgoo at 12:29 PM No comments: 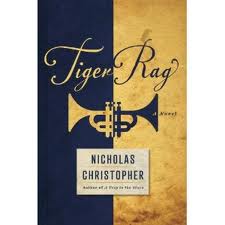 One of the intriguing things about the early twentieth century is how the history of that time is just tantalizingly out of reach.  Often we have only oral histories to inform us, with sound or video documentation coming years later.  For fans of American music, these tidbits can be quite tantalizing.  How did the early bluesmen sound when they were playing a gig?  What were their repertoires really like?

Tiger Rag spends a great deal of time fleshing out one of those mysteries.  Buddy Bolden, by all accounts a seminal figure in the early development of jazz, died without ever recording.  In the alternate world of Tiger Rag, Buddy did record – but the resulting cylinders were long lost.

Christopher uses two narratives to tell his story.  One is set in the past, starting with Bolden’s recording session, & then following the cylinders through time.  The other is set in the present day, as a dysfunctional mother and daughter take an impromptu road trip from Miami to New York.  Unbeknownst to them, their own family history ties into the fate of the missing Bolden recording.

The strong point of Tiger Rag is Christopher’s ability to make the history of jazz become alive.  Recording sessions, gigs, it feels real in a funky visceral sense.  There are some bigger names that become tangentially involved in the story, but primarily we are dealing with those on the tangents – sidemen, siblings and spouses.

I was much less interested in the contemporary storyline.  While both Devon and Ruby (her mother) were well developed characters, in such stark contrast to the highly entertaining figures in the past, they felt thin.  While turn of the century New Orleans felt bold and alive, present day New York seemed pale and skeletal.

That being said, if you have an interest in traditional jazz, or New Orleans in the early twentieth century, you’ll enjoy Tiger Rag.
Posted by Burgoo at 12:25 PM No comments: 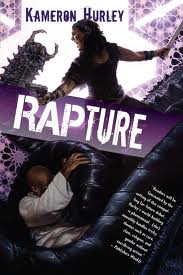 By now you should know what to expect from the Bel Dame Apocrypha.  Bugs.  Blood.  Betrayal.  Success that feels more like failure.

In Rapture, former bel dame Nyx is forced out of retirement in order to do one last job.  This time, she has to retrieve a political leader & bring him back to Nasheen alive.  As luck would have it, it happens to be someone she thought she had already killed.  Her journey to retrieve this man takes her beyond the edges of civilization.

With the conclusion of the Bel Dame Apocrypha, Hurley may have written the best SF series of the new millennium.  If one purpose of speculative fiction is to reflect and comment on present existence, few series tackle the problems of modern life in such an unflinching manner.  Examining violence, religious intolerance, sexism and gender roles, and environmental collapse, Hurley deals with the significant issues of our time.
Posted by Burgoo at 10:52 AM No comments: 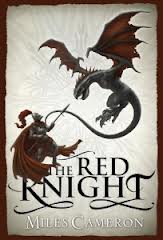 The titular Red Knight leads a company of mercenaries who have been hired to find & kill a monster who is on the estate of a large Abbey.  As their monster hunt proceeds, they realize that the monster is just the first of many, and what looks to be a simple hunt & kill operation turns into a protracted siege, with the fate of the kingdom at stake.

The Red Knight is a remarkable genre debut.  Its melding of gritty historical background with magical elements will immediately draw comparisons to George RR Martin.  Like Martin, Cameron uses a fictionalized medieval England as the setting for his larger fantastical tale.  There is a large cast of characters, with many POVs.

What sets The Red Knight apart from the legion of Martin imitators?  Several factors:  first is the feeling of historical accuracy given to the equipment and combat sequences.   Cameron is apparently a re-enactor, and his personal experience with the historical equipment comes through in his writing.  He writes with full awareness of the physicality of the medieval armor & weaponry he discusses.  He knows where something is going to chafe, and how your arms feel after swinging heavy weaponry.

The second factor would be his unique magical system.  Without delving deeply into spoilers, magic users are divided into two groups; users of the light, representing civilization, and users of the green, representing the Wild.  Additionally, he incorporates the ancient practice of memory palaces  into the subjective experience of the magic practitioners.
Magic & weaponry aside, Cameron does a great job working with his large cast of characters.  He develops distinctive voices for each of his POV characters.  We see the mercenaries grow from little more than outlaws into a force fighting for something bigger than them.  The fact that they are reluctant heroes makes their story all the more compelling.

Strangely enough, the strong historical spine to this novel may be its biggest drawback.  Readers uninterested in medieval siege tactics, the composition of military groupings, or the logistics caravans may be somewhat alienated from a riveting story.  Personally I found the detail fascinating and grounding in a fantastical story.

The Red Knight is highly recommended.  It is one of the best fantasy debuts I’ve read in many many years.  I am very much looking forward to continuing the series.
Posted by Burgoo at 2:25 PM No comments: