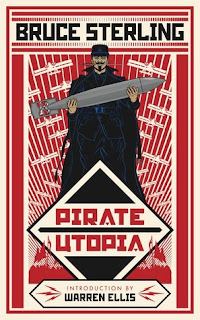 I’m tempted to say that the setup here is quite simple, but then what really is? What if the futurist takeover of an Italian city in the 1920s had lasted? What if the course of European history had been different?

It’s complex, it’s mesmerizing.  My thoughts initially go to Pynchon, with his love of fictional and not so fictional secret societies. But then there’s also Burroughs, and his thoughts on lost pirate colonies in the Atlantic.

If you are expecting some sort of cyber-anything romp you are going to be sorely disappointed.  This is more of a boundary pushing literary piece than what you might normally think of as SF.  I have to say that personally I admired it more than I enjoyed it.
Posted by Burgoo at 3:50 PM