Surprisingly Not a Single Reference to Paper Sales 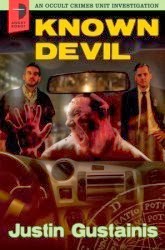 Justin Gustainis, “Known Devil” (Angry Robot, 2014)
There’s no doubt that Known Devil starts off on a high point, with a Tarentino parody involving elves robbing a diner.  This ludicrous scene is played straight, with a world weary narrator giving us the action.  It’s hilarious.

Unfortunately that scene is the high point of the novel.  Its blend of absurdity, violence and cynicism is amazingly effective.  As the story goes on, the absurdity is forgotten, and a rather straightforward police story emerges.  OK, it’s not entirely straightforward, as this is urban fantasy, and there are both cops and criminals of various supernatural natures.  But if we were to convert all of the supernatural characters into more realistic characters, it would all still work.

There’s a young mob boss from Philly who is trying to move into Scranton.  The locals are fighting back, but there’s a gang war going on, and our hero Markowski has to try to contain the damage.

It’s not that Known Devil is a bad novel.  I found it quite entertaining.  However, it really didn’t add anything to either police procedurals or urban fantasies.  There was so much promise in that opening scene.  It never comes close to living up to that.