Surprisingly, the Clowns are not to Blame. 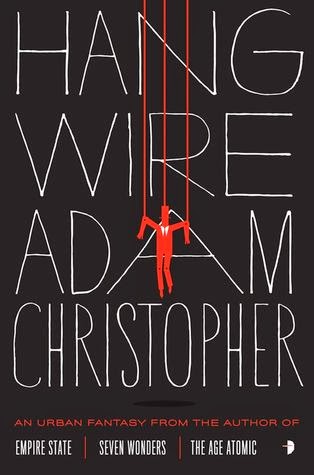 Adam Christopher “Hang Wire” (Angry Robot, 2014)
There’s a lot going on here.  We have normal young San Francisco people with blackouts and missing bits of memory.  We have a serial killer.  We have gods hiding amongst the populace.  We have an circus that is hiding evil.  That’s a lot of balls for Christopher to juggle.

The sheer amount of story elements mean that the book quickly becomes somewhat disjointed as Christopher is forced to leap between characters and situations that have no obvious connection.  Add in some flashbacks and things can get confusing quickly if you don’t stay on your toes.

I hate to criticize an author for ambition, but ultimately I feel like that’s a great deal of the problem here.  Christopher has a big vision for the story that he wants to tell.  Unfortunately he sacrifices depth (specifically character depth) for width.  I found that I just didn’t care about any of the characters.  Too many felt like hastily drawn sketches, rather than fully fleshed out people.

I can’t help but feel that this book would have been significantly better if there had been more to it.  Build more slowly and carefully.  Without reader investment in the characters, it becomes merely an exercise in world building.