A Monkey, a Cyborg, and a SF Writer are on a Zepplin 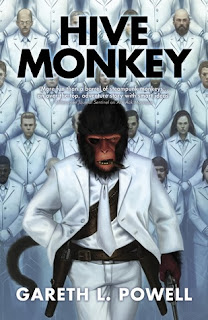 
No, that’s not the setup to a bad joke.  It’s the start of a wonderfully zany SF novel.

The fate of the world is at stake when everyone’s favorite fighter pilot monkey has to fight off the evil hive mind collective that is headed by his duplicate from another dimension!

Look, the more you try to talk about this story, the crazier it sounds.  Suffice it to say that there is fast plotting, lots of action, and more crazy SFnal elements than you can shake a stick at!  Where many authors would try to hold back, Powell seems to feel that doubling down is his best bet.

This is some of the best modern pulp that I’ve read.  Recommended for a light fun read!