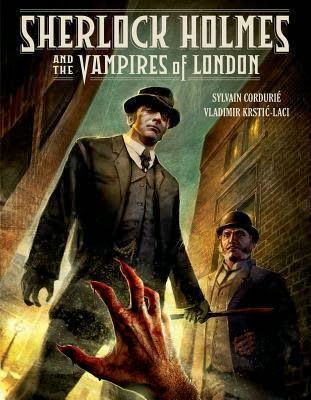 Is it just me or is a rush to mention Moriarty a sign of a bad to mediocre Sherlock Holmes story?

Our story here begins after Sherlock’s “death” at Reichenbach Falls.  Apparently he’s staged his death so that he can vacation.  Unfortunately, he gets a call from work and his vacation is cut short.  Watson & his wife are used as leverage to get Sherlock to investigate a case.  There’s a vampire killing members of the English royal family and the Vampire Lord of London needs Sherlock to catch him.  At this point I feel like I should note that apparently the World’s Greatest Detective (it’s true, Batman, get over it!) has never noticed these vampires while actually living in London.  And apparently Sherlock is the only person who can catch this rogue vampire, even though the vampires all have super strength, speed,etc..

So the premise of this whole thing is absurd.  But of course that was fairly obvious from the title alone, right?  And just because it’s absurd doesn’t mean that it can’t be a barrel of fun.  Ultimately Sherlock Holmes and the Vampires of London fails because of characterization.  Sherlock is just not believable as the World’s Greatest Detective.  He’s good, but not great.  And the Vampire Lord is generic without chewing enough scenery.  If you’re going to just insert a trope, you have to make it interesting.  Give me a crazier more evil Vampire Lord!

Ultimately I’m not sure who the target audience for this actually is.  Perhaps a steampunk fan who isn’t very familiar with the Holmes mythos?
Posted by Burgoo at 8:04 AM