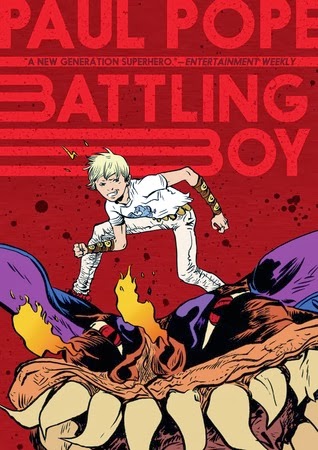 Let’s get something out of the way right off the bat – Battling Boy owes a huge debt to Jack Kirby.  Strange cities, monsters, aliens who are the equivalent of gods – all frequent elements of a vintage Kirby story.  The Boy himself reminds me of Kamandi.

Battling Boy is sent to the vast city of Arcolopis (The name is itself reminiscent of Kirby.  I think he would’ve used a “k”.) His battles against the monsters that attack the city will serve as his coming of age adventure.  He’s on his own, with only a suitcase that his parents have packed for him.  Fortunately he has a dozen magic (?) shirts that give him the power of their animal totems.

Pope’s artwork is also visually a callback to Kirby’s.  Bold lines and vibrant colors.  Action filled panels and pages.  Is Pope the modern artist who follows the king most directly?

My only regret with this book is that it is just the setup for what seems to be a much longer story.  Give me more.  I’m looking forward to reading about the Boy’s adventures.
Posted by Burgoo at 11:47 AM