Too Many First Novel Problems 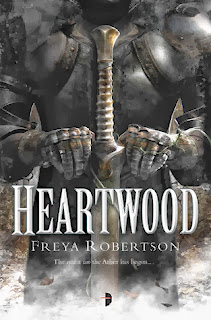 
When a religious order of knights hold a peace conference they are attacked by previously unknown enemies.  These watery warriors attack and steal the heart of a magical tree that is the key to the continued prosperity of the land itself.  The various factions at the conference (plus the religious knights) set aside their differences to work together to defeat the new enemies and restore health to the tree and the land.

Freya Robertson has attempted to find the sweet spot between the new and the familiar.  The underlying story is familiar to any fan of the genre:  outside evil forces attack & force the protagonists to go on a series of quests to do [action] to the McGuffin.  Yet the details are not seen every day.  The religion centers around the worship of a tree, which is vital for the land to retain healthy harvests & what have you.

The details were what had attracted my attention to Heartwood.  The concept of a sacred tree sounded like Robertson was portraying a pagan culture.  Unfortunately, in execution the culture is just a faint gloss of paint over typical Fantasy Christianity.  The primary cultures in the book seem to be lifted from the European Middle Ages with a few changes (such as the presence of female knights).  Their sacred language even seems to be some sort of bowdlerized Latin.

At over 500 pages, Robertson has plenty of room to work with.  But despite the length, the characterization and world building in Heartwood feel a bit half baked.  Too much of the story feels like it happens in some generic Fantasy Land, and characters seem to suddenly appear and act as if we should care about them.  The characterization issue in particular is a problem.  Numerous plot points lost their impact to me simply because I didn’t know or care about that character.  It’s not often that I feel like a 500+ page book is rushed, but in this instance I do.

Heartwood starts off with an intriguing concept, but is quickly derailed by careless world building and inadequate time spent on characterization.  While somewhat entertaining, it falls far short of the promise originally shown.
Posted by Burgoo at 12:22 PM