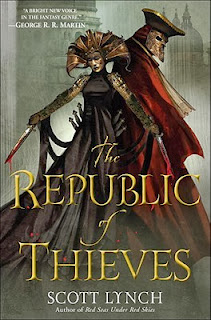 Books in the midst of a series seem to be like a middle child.  There’s not the boldness and novelty of the first, and they never attain the bittersweet nature of the finale.  But along the way they’re constantly compared to their siblings, and always destined to fail.

For most readers, the Republic of Thieves comes with high expectations.  It’s been years since the last book in the series.  Rumor has it that with this volume Sabetha, the love of Locke’s life, will finally appear on the page.  Plus the book itself has to compare positively to the first two in the series.  It can’t be too much of a departure, but it also must be better than the first two.  No wonder Jan yelled about “Marcia!”  I’m exhausted just thinking about it.

Lynch gives us two narratives:  a present day narrative, where Locke & Jean try to steal an election, and a past narrative, where Chains’ students spend the summer being actors in another city.  The book cuts between the two narratives, usually jumping just when you can’t believe that he was leaving then.  Is there anyone who handles multiple narratives with cliffhangers better than Lynch?  I was continually enraged as he forced me to switch from the narrative I was so deeply invested in. (Of course in short order I was deeply invested in the other narrative, so it worked out OK.)

How were the two stories?  I loved them both.  The present day storyline, with its election shenanigans, was full of witty prankish behavior.  In a twist, our heroes are competing against Sabetha.  And yes, she is as good as I thought.  The narrative in the past has the group being actors, with a large amount of development for the theatre world of the time.  I’ve often had a gripe that fantasy novels that detail every minute bit of trivia about a world seem to ignore any and all forms of the arts.  So I am an absolute sucker for anyone who develops music, theatre, etc for their world.

I have been a bit surprised at what seems to be a bit of a backlash towards Sabetha.  Perhaps it’s to be expected.  After all, how could she possibly live up to expectations?  My own thought is that the description of her, as at least Locke’s equal (and I think an argument could be made that she’s actually better at the game), makes Locke seem to be less of an idealized figure.  We see more of his flaws in this novel.  I can see how that would provoke a negative reaction from a certain segment of fans.

The Republic of Thieves was a great reading experience.  I enjoyed it just as much as the first two volumes in the series.  Middle children do have a lot to offer, if you just get to know them on their own, not in comparison to their siblings.