Left Alone, This Would Be Great 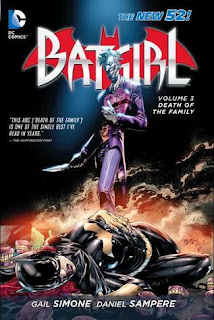 
At this point, after several decades of mismanaging the character, I’m really not sure how DC can make the fans happy.  Batgirl is popular enough to support her own comic, but still not significant enough to prevent editorial meddling.  And so Barbara Gordon is shot and replaced and healed! And all the while there are fans of each Batgirl who complain about every change.

There’s no question that Gail Simone cares about the character as deeply as any fan.  But as the firing/rehiring event of some months ago showed, there are limits to what the actual writer of the comic can do.

Unlike so many of the DC writers, Simone is taking advantage of the changed universe of the new 52 in order to tell new and different stories.  In addition to be cured, Barbara now has an estranged mother and a psychotic brother.  These relatively small changes open up new avenues for storytelling, new dynamics to be explored.

The longer story that Simone is telling here is about the Gordon family.  What does it mean that the long missing mother has returned and that the evil brother is on the loose?

Unfortunately the editorially mandated crossovers interrupt the flow of Simone’s story.  We have issues that have to address not one but two Bat events.  There’s a Court of Owls issue, as well as the Death of the Family crossover.  While none of this is bad, it’s just somewhat jarring and takes away from the story that Simone is telling.