Hell isn't Other People. It's Forms, Lines, and Paperwork. 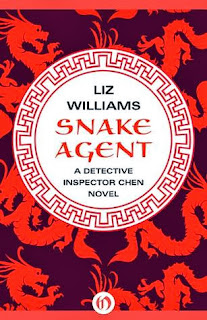 
Do you ever feel like you’re just tired of stories where the protagonist goes to Hell to fulfill some quest?  It seems that in the last 10 years or so it’s gone from being a daring exercise in storytelling to a tired and worn trope, ready for retirement.  Doesn’t every urban fantasy series have a story arch involving a lengthy stay?  How many times will Sam and/or Dean get “trapped” there?  Why doesn’t some enterprising young demon set up a small business subletting apartments there – there should be plenty of demand.

With my burnout in mind, I was shocked at how much I enjoyed Liz Williams’ Snake Agent.   Williams’ Chinese future gleefully ignores the Western tropes that I have grown so tired of.  We’re told a buddy cop story, where one cop is human and the other is a demon.  They’re working together to investigate a vast conspiracy that will bring harm to large numbers of humans as well as destabilize the complex hierarchies of Hell.

Williams’ Hell, like the rest of the universe of the Detective Inspector Chen Novels (this is the first book), flows organically from its setting.  This is not a vaguely Chinese city placed into a Western metaphysical construct.  Here all beings, god, demon or human, are on the wheel, and have more in common than in difference.  Gods and demons are not fundamentally others.  They have the same sort of basic drives and needs.  Hell is a bureaucratic mess.  There are ministries and functionaries competing for prestige and status.  Even the geography is a mirror of sorts to the Earthly realm.  Naturally enough, for a fundamentally polytheistic culture, there are mentions of exotic Western corollaries to what we actually see.

Snake Agent is one of the most original urban fantasy novels that I have read in a long time.  I’d highly recommend it for anyone interested in reading something a bit off the beaten track.