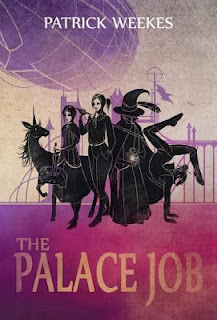 
If you are writing a fantasy caper book in this decade, you are clearly doing so in the shadow of Scott Lynch.  There’s no shame in that – he’s one of the hottest writers in the genre currently, and he writes exclusively in this subgenre.  So you are going to get compared to him.  With that being the case, WHY would you ever name YOUR protagonist Loch?

Fortunately, names aside, there aren’t a lot of comparisons to be made between the two characters or worlds.  You have the name and the subgenre, but really that’s about it.

The Palace Job is about a woman who assembles a team to pull off a heist to steal some valuables who are hers by right.  There are as many action movie tropes in play as heist tropes.  For example, the early part of the book is all about assembling the team of specialists, where each team member is given a slightly highlighted segment culminating in meeting Loch and being recruited for the team.
Weekes clearly understands some basics about the genre.  The emphasis is on the plot – what is the caper, what are the obstacles (expected and unexpected) – and the tone (consistently light and humorous).  It makes for an easy breezy read.

Unfortunately Weekes seems to rely on the tropes so strongly that he can be a bit underwhelming with regard to characterization or world building.  While the character interactions are entertaining, they do tend to be somewhat interchangeable and based on stock archetypes.  Likewise the world itself seems more reliant on a formula of cool idea + stock fantasy world than I recommend.

While The Palace Job starts strong, there’s clearly a point where its flaws catch up to it and it becomes a real slog.  Tone and action can only carry a book so long.  Eventually the fact that we don’t care about the characters will catch up to it.  Weekes has some great ideas here; they just seem to get overshadowing by technical limitations.  Hopefully his future works will be more solid.