Hey! You Got Your Apocalypse In My Western! 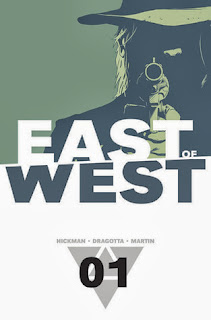 East of West is one of the creator-owned comics currently getting the big buzz.  What is it?  And it is worthy of the hype?

The story itself is an old one.  A man wanders trying to find his wife.  Is she alive?  Can he find her?  What happens when they are reunited?

If the devil is indeed in the details that has never been truer than in this case.  The man just happens to be Death.  You know, like from the Four Horsemen.  (And the other Horsemen are chasing Death.  Apparently there’s some sort of sibling falling out.  And they (the other Horsemen) are now children.)

All of this strangeness is taking place in a fractured America that is split into numerous factions.  Some seem to be Western themed, while other areas are inexplicably SFnal.  Underlying the whole schism is an apocalyptic religion, which has surprised its believers by actually being true.

It’s perhaps the world building that is my biggest issue with East of West.  Yes, it is wildly inventive.  The attempt, at least, is to seamlessly integrate numerous genres into a single experience.  But without explanation, the world feels haphazard, and not organic.  It’s like when kids play & keep introducing new elements to the game because they’re cool, and not because it actually works.  How is it that at times we’re looking at a world that is closer to the 19th century than to ours, and at times we’re looking at a world far into our future?  While there are numerous unexplained plot points, I’m willing to let that go, especially so early in a serialized narrative.  But the world needs to feel organic, or at least to have that discrepancy itself explained.

Despite the problems that I have with East of West, it is such a display of imagination and artistic craft that it is impossible for me not to be impressed.  This first volume shows so much vision that I am naturally intrigued at what could follow.
Posted by Burgoo at 1:52 PM