Not Another War with Atlantis! 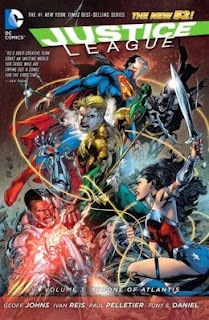 Even though I still had some bad taste in my mouth from that Wonder Woman fiasco, I decided to give this Justice League collection a try.  They’re the flagship, right?  I had always enjoyed the Justice League when I was a kid.  While some of the heroes seemed a bit stiff on their own, they seemed to do much better with each other (Yes, I am talking about you, Barry and Hal.)

The first couple of issues are fairly Wonder Woman centric, focusing on the Cheetah & the developing romance between Wonder Woman and Superman.  Setting some small things aside (cheetahs live in the savannah, not the jungle!), these are solid stories.  I like the JLA Wonder Woman much better than the Wonder Woman in her own title.  Regardless of my feelings about how Johns handles big events or the overall shape of comics, he has a nice touch with small personal moments.  I enjoyed the “off duty” scenes of Superman and Wonder Woman getting to know each other.

The meat of this collection is a crossover with the Aquaman book.  Atlantis declares war on the surface world, and launches attacks that only the Justice League can stop.  (Is Atlantis ever mentioned without either declaring war or threatening to declare war?)  It’s all solid enough for this sort of story that quite frankly you’ve probably already ready 15 or 20 times in the past.  The new 52 twist on the story is that the Justice League is just as happy to fight each other as to fight the Atlanteans.

While for the most part the art was functional if uninspired, the battle sequences were a mess.  More emphasis and thought seemed to be given to the pinup nature of the illustration rather than how much sense it actually made.  As a result, these pages tended to be muddled and confusing.

Overall, the third Justice League collection is fine, if a bit disappointing.  It’s disappointing primarily because I expect and want one of the flagship titles to be so much better.