John Matthews “Letters From a Murderer” (Exhibit A, 2013) 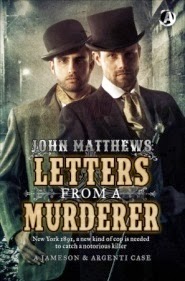 I suppose that I shouldn’t find it surprising, but apparently there are some fringe Ripperologists who believe that Jack the Ripper came over to the US after the famous London killing spree.  I am surprised in part because the whole Ripper story seems so quintessentially British.  It just never would have crossed my mind, any more than thinking that a defeated Darth Vader escapes into the Federation.  Of course the Ripper theories are so diverse that it’s not really shocking to hear anything, no matter how far-fetched.

Letters From a Murderer is set in Victorian New York City.  Jack the Ripper has resumed his killing spree, and detective Joseph Argenti is paired up with English pathologist Finley Jameson in their quest to stop the killer.  The investigation is complicated by the politics of New York in the 1890s.  There’s a top-down mandate to clean up corruption but the entrenched members of Tammany Hall aren’t going away easily.

In a surprising choice, this is a novel that is as much about the power struggle for control of New York as it is about the pursuit of the Ripper.  There are political and financial reasons for certain persons to attempt to stop Argenti’s investigation.  It is these forces that are responsible for the tension of the novel.  While the Ripper seems to strike somewhat randomly, we can see the tension mounting as forces escalate their attempts to keep Argenti’s investigation from being successful.

Argenti’s erstwhile partner in the investigation, Finley Jameson, was one of the pathologists involved in the original investigation in London.  There have been quite a few comparisons to Holmes when describing Jameson, but I think that’s a comparison that sells both characters short.  While Jameson is both an English gentleman and a scientist, he seems to have a much richer internal life than Holmes.  The modern interpretation of Holmes is that of a (borderline) sociopath, who is otherwise a Gary Sue.  Jameson shows a strong sense of empathy at multiple times during the story.  In fact, his greatest personal failing, his possible addition, many be directly linked to his inability to distance himself from others.

Letters From a Murderer does a great job of balancing multiple storylines as well as the larger balance of plot and character.  Matthews not only creates intriguing sympathetic characters inhabiting a gritty gaslight New York, he tells their stories in a way that make it nearly impossible to put this book down.