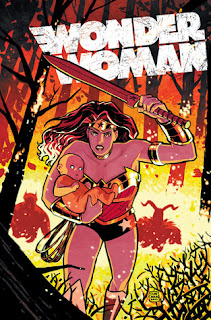 Even though we’re two years into the reboot, I still hadn’t gotten around to reading any of the core titles of the new 52.  For me, it’s been all Batwoman, Dial H, and other titles not really integrated into the center of the DCU.  So I was excited to have an opportunity to read some of one of the “Big 3”.  After all, this should be one of their flagship titles, right?

The third volume of Azzarello’s Wonder Woman is deep in the midst of a story he’s been telling since he took over the title.  Without some help from the Wiki, I would have been totally lost.  The big maguffin in the story is the child of a woman named Zola.  Apparently the father is Zeus, and now everyone wants to kill the child.  Wonder Woman wants to protect the child, but first she has to find it.  There’s also a running plot about The First Child of Zeus, who has been buried under ice for thousands of years, but is freed and now has some vaguely evil plans that we are not told.

Anyway, there’s an awful lot going on plotwise, and yet it feels like nothing is really going on.  Wonder Woman runs around and interacts with a large number of gods & demigods trying to find the maguffin.  There’s lots of not particularly exciting fighting, and in the end the plot(s) don’t really seem to progress at all.

Overall the story is almost hard to evaluate.  So much of what happens in this book is ultimately inconsequential.  And to have a story running over three trades with so little progression since the beginning?  Maybe it will work out…. But the payoff better be very good with so much buildup.  All the meandering plotting is made worse by the fact that there are so many characters that are woefully underdeveloped.   The only real character development I read was a consistent snarky bitchy tone that seemed to be employed by almost all the characters.

Now I know that there is a lot of support for Cliff Chiang’s art.  As far as I know, this is the first time that I’ve read a book that he’s done.  It was strongest in the sequences with the First Child.  These bits were a simple “barbarian in the modern world” set among ice flows and fighting sea monsters.  His style seemed to be best suited for these pure fantasy/horror bits, and significantly weaker when portraying more standard superhero fare.

There were a couple of specific things are have really stuck in my craw after reading this trade.  Wonder Woman flies into the Middle East, interrupting a small battle.  She does her thing, deflecting all the rounds that are shot at her.  Later, she’s leading a small child into the presumed safety of an ancient underground temple (because we know *that* never turns out bad, right?).  Wonder Woman has promised to protect the child.  When a sudden storm of butcher knives appears, Wonder Woman somehow FAILS to deflect one (apparently they’re harder to block than the high velocity rounds she was knocking around moments before), and the child DIES.  (OK, it’s later revealed that it wasn’t really a child after all, but do we really need to see an image of Wonder Woman failing to save a child?  Is this what DC heroes are about now?)

Later there’s an appearance by Orion of the New Gods.  He’s sent to Earth because they’ve detected a “grave danger” to the Source.  Now apparently the new Orion is actually some kind of super-bro, because he’s all “no problem, I’ll kill it.”  He gets mixed up in the storyline and spends his time making sexist statements, hitting Wonder Woman on the ass, and talking about how he’s going to kill the maguffin.  What are they thinking?  Do they think that the people who are interested in reading a Wonder Woman book want to read about a superbro?  The only way to make this work is to use that characterization to generate heel heat, but Orion is never portrayed as a villain.

Additionally, this portrayal shows such a lack of understanding of the whole Fourth World mythos as to be ridiculous.  Orion may be the son of Darkseid, but he’s always fighting against his darkness.  He wants to avoid all of that, and not be like his father.  And the All Father, representing the opposite of Darkseid, would not order the death of a child.  That’s just blatant disregard for all of Kirby’s work on this mythos.

Eventually I felt like this book was like a bad burrito:  I tasted it for days afterward.  Just when I thought I had moved on, I’d burp up another taste.