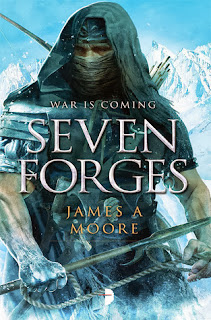 The setup for Seven Forges is straightforward. A retired soldier is hired to lead an exploratory expedition into the unmapped wilderness bordering an empire.  To his surprise he encounters members of a brutal theocracy.  Members of this society, the Sa’ba Taalor, are sent back to the Empire and the effects of this visit could change the world for everyone.

It’s difficult to evaluate Seven Forges because it reads like half a novel.  As the book ends, all important storylines are going full speed.  How can a reader evaluate the development of character, theme, etc when it is all willfully left until the second volume?  At the end of the book, character and world building both feel a bit under cooked.  Is this intentional?  Will there be significantly more in the next volume?  Your guess is as good as mine.

I will say that Moore does a great job controlling the information that we get about these strange people at the edge of the world.  The mystery of what exactly is going on with the Sa’ba Taalor is central to the book, so it feels intentional that we don’t know very much about them.  However, Moore slowly gives us information, some of which just raises more questions.

This sense of discovery and learning just exactly what is going on is central to what is enjoyable about Seven Forges.  Most of the time the reader doesn’t know any more than the characters from the Empire.  And as events start to get more complicated, we want to understand just what exactly is going on.  But Moore steadfastly refuses to answer all the questions, even as we start to puzzle out answers to a few.

If you are the sort of fantasy reader who enjoys super detailed lists and food descriptions, or elaborate magical systems, then this may be a frustrating read for you.  Seven Forges is not that kind of book.  I would encourage you to try to embrace the bloody mysteries of this world.