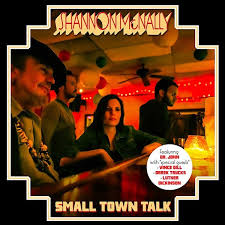 The first of the modern tribute albums that I can recall was a Neil Young tribute.  An assortment of college rock bands doing covers.  People loved it.  It was the material that you grew up on, played by the performers that you listened to at the time.  It predated Neil’s grunge revival, & in many ways primed the pump for that comeback.  He wasn’t tainted by the classic rock baggage that would’ve kept so many performers from seeming relevant to that same audience.

Since then, that concept of a tribute has been run into the ground.  There’s a tribute to anyone and everyone, with more popular acts having multiples.  And the quality of the participants has declined as well.  Where once it was the A list, now it seems that just about anyone will be used to fill out a CD.

The current trend is to do a cover version of an entire album.  This is still a fairly recent trend, so there’s still some potential left in the concept.

Perhaps the oldest version of the tribute album is for a performer to record a record of a single songwriter’s hits (and misses).  How many country acts in the 50s & 60s recorded an album called “__ sings Hank Williams”?  There was a time that I kept a running list.  I’ve given up on that long ago.

Shannon McNally’s latest is a throwback to that tradition.  “Small Town Talk” is a look back at one of the architects of swamp pop, Bobby Charles.  He’s most famous for writing hits for Bill Haley and Fats Domino, but he was a mainstay of the early New Orleans R&B scene.  Along with Dr John, he was one of the first white musicians to cross the color line & play on R&B hits.

In my mind, McNally occupies a similar space to Bonnie Raitt.  Her husky vocals give the songs a bit of grit, and her country leanings provide an essential element to round out the swamp flavor.  Backed up by top notch New Orleans session men, this is one of those albums that seem to exist out of time.  You could easily be convinced that it had been recorded at any time during the last 40 years.  Highly recommended.

Email ThisBlogThis!Share to TwitterShare to FacebookShare to Pinterest
Labels: album of the week, music, shannon mcnally