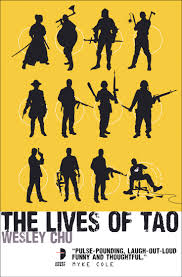 Once again I seem to be outside the hivemind.  Look around the internet, & you’ll see glowing gushing reviews for Wesley Chu’s debut.  Funny, action packed, with a protagonist that people identify with.  That hasn’t been my experience at all.

Here’s the setup:  When a spy mission goes cockeyed, an alien named Tao is forced to look for a new host.  He grabs Roen Tan & enlists him in a war between alien species that goes back millions of years.  Hijinks ensue.

The tone is light & breezy; the type that you would normally associate with an Urban Fantasy novel.  Despite the hilarity that so many others experienced, I didn’t find the book to be particularly funny.  Of course humor is incredibly subjective, so YMMV.

My biggest gripe is squarely at the center of the book:  Roen Tan himself.  When we first meet Roen, he’s an underemployed fat slob with a post-collegiate drinking problem.  While out on a drunken night on the town, he ends up playing the unwilling host to Tao.  Other than as a collection of negative characteristics, Roen as a character doesn’t really seem to exist.  He has no interests or hobbies.  He doesn’t actually have any friends.  (His roommate is the closest to a friend that we meet, yet their relationship seems to be more of a caricature of young male friendships rather than an actual representation of such.) He exists more as a placeholder for audience identification than as an actual character.

Assuming that Roen is indeed intended as an audience identifier, then his characterization is insulting.  (And I would argue that he does in fact exist solely for the reader to identify with.  The narrative is crafted in such a way that the reader is forced into this position.  And if there’s any doubt about this, simply read some of the many reviews on the book.  It’s clear that readers are seeing themselves in Roen.)  Roen is continually referred to as being incompetent and of less worth than other characters.  Chu doesn’t try to subvert this image, but instead plays it up; perhaps to greater dramatize Roen’s training.  If the author creates a character that is intended as a reader substitute, and that character is continually belittled by other characters as well as the author, then what does the author think of the reader?

Of course we do have another option in characters, that being the titular alien, Tao.  Tao is presented as one of the good guys, but think for a moment about what actually happens here.  Tao forces himself upon an unwilling host (We don’t know if Roen would have given permission, but he was never asked for his consent.).  Tao can only leave Roen with Roen’s death.  So Roen has zero choice in the matter.  At this point Roen is thrust into a war that has lasted for thousands of years.  And what exactly is the difference between the good guys and the bad guys?  Both sides want to run the world and treat humans as little more than pets.  The “good” guys might create less military destruction, but we really don’t know that.

With such a problematic core, I didn’t find The Lives of Tao to be enjoyable.  Admittedly, I’m on the outside of what seems to be the consensus opinion.
Posted by Burgoo at 10:18 AM