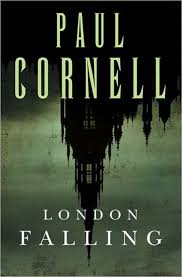 The most common failing of any mashup is that the parts aren’t true to their origin, & the result is somehow less than the sum of its parts.  Paul Cornell’s London Falling combines a police procedural with dark urban fantasy, and retains both the grittiness of the former with the wonder and awe of the latter.

The book opens as a straight police procedural.  We see the culmination of a long undercover operation to arrest the leader of a large portion of the organized crime in London.  When the suspect dies a shocking and strange death while in custody, a small group of police officers are tasked with cleaning up the mess that the investigation has become.  They follow a lead into an abandoned house, where a strange encounter leaves the police officers with the Sight.  That is, the ability to see the hidden supernatural nature of the city.  It turns out that their prey is a centuries old witch who has been abducting and killing children, among other victims.

Unlike most urban fantasy, Cornell’s magical London is a horrible place.  There is blood sacrifice, murdered children, horrible things in the shadows, and other dangers.  The detectives are stumbling around trying to find the rules of this place, and the reader along with them.  They struggle to achieve the few answers that they can find, and we are left with as much mystery as the characters themselves.

Rather than having his characters respond with a gleeful acceptance of this other state of reality, Cornell has the characters respond the way that people actually do after a trauma.  There is denial, followed by a certain amount of acceptance, and ultimately a reliance on routine.  There’s a sense that the familiar procedure of police work is all that is keeping them sane.  And their procedure is what they count on to resolve the situation.  The difference being that this time it’s (literally) a wicked witch, and not a drug lord or other criminal. Just as this reliance on procedure grounds the characters, it also grounds the story for the reader.  The mental reactions of all the police officers are thus relatable.

London Falling is a fast paced gritty dark fantasy that should appeal to fans of both police procedurals and urban fantasy.  Despite the dark subject matter, it was a very entertaining read.  While the story is complete in his volume, there does seem to be a setup for future stories in this world.  Hopefully they’ll be just as compelling.