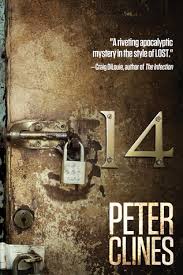 One of my favorite horror tropes is when the familiar becomes sinister.  Creepy dolls, municipal buildings like schools or hospitals; I’m sure that you’re familiar with the technique.  In 14, it’s an apartment building.  There are a lot of them out there like this.  At first glance they appear to be normal, but when you look more closely, things get strange.  The architecture doesn’t quite make sense.  Rooms don’t align; door or stairways don’t actually go anywhere.  Changes and additions seem to have been made on an ad hoc basis.

The story opens with Nate, our protagonist, moving into an old apartment building.  As he gets settled in he begins to notice strange things, like the light in his kitchen that only works as a black light.  Or the strange florescent roaches with an extra leg.  The more he looks into things, the stranger it becomes.  Eventually he assembles his own Scooby Gang with his neighbors.  They pool their knowledge and resources and eventually get to the bottom of the mystery of the Kavach building.

There are a couple of reasons why 14 is so effective.  First is Clines’ skillful character development of various members of the ad hoc Scooby gang.  They all have their own personalities, backstories and motivations.  There are some mysterious elements as well to some of the characters, providing additional suspense and questions.  The interactions of the building residents are a joy to read.

Most important is the skillful way that Clines’ handles the mystery at the heart of 14.  The reader is only privy to the same information that Nate has at any given time.  As events unfold and more and more strange facts emerge, there is a growing sense of dread.  What is going on with this building?  While the eventual solution does explain the strange things we’ve seen, the various pieces that are uncovered are sufficiently bizarre that it’s not easy to predict the secret of the Kavach building.

14 is a horror mystery rich in mythology, with vibrant characters and a strong emotional core.  I’d highly recommend it to fans of the weird.