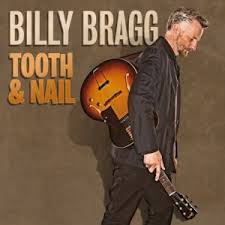 For some reason, in my mind certain musicians are stuck in time.  So the Stones are always in the late 70s.  Sonic Youth is in the early 90s, a couple of albums away from “Goo”.  REM is in the late 90s, with their best years far behind them.  Billy Bragg is in the mid 80s, an angry young man with an electric guitar, caustic wit, & a powerful need to be loved.

Of course in reality none of those images are accurate.  “Tooth & Nail” is quite clearly the work of a middle aged man.  The urgency and anger of his younger self are gone.  This is not to say that the album is without charms, there are plenty to be found, just not the same ones as on his early records.
The closest to the old angry Billy is “No One Knows Nothing Anymore”, but even that track is more consumed by cynicism than righteous indignation.  In fact it seems emotionally out of place on a collection that veers more towards the personal.

The changing priorities and themes are not without their own merit.  See the wordplay on “Handyman Blues”, as Billy channels some of the old Letter Man magic to change pottery to poetry.  (Did they even have Letter Man in the UK?)

While the anger may be gone, the sincerity remains.  And Bragg’s craftsmanship as a songwriter has only improved with age.  He took 5 years off before recording this album.  Let’s all hope that he doesn’t take that long a break before the next one.

Email ThisBlogThis!Share to TwitterShare to FacebookShare to Pinterest
Labels: album of the week, billy bragg, music