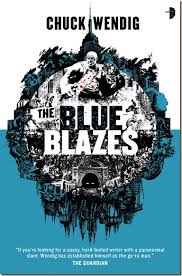 By now you’re probably aware of how the bog standard urban fantasy steals its bones from Detective novels.  The protagonist is in the role of the classic private eye, trying to unravel some sort of mystery, and the cast is populated with an assortment of vampires/werewolves/whathaveyou.  In The Blue Blazes, Wendig sidesteps this generic setup, borrowing instead from the crime novel.

The protagonist, Mookie Pearl, works for the mob (or The Organization, in Wendig’s world).  He runs crews who mine Blue Blazes, a powder that makes you feel invincible and lets you see the terrible things that live deep in the Earth below New York City.  Unfortunately for Mookie, the head of The Organization is dying, and there’s a succession problem.  And oh yeah, his teenage daughter is working on the outside to seize control of the whole thing.

The Blue Blazes was my first experience reading one of Wendig’s books.  I was delighted to discover his lean and mean style.  Short sharp sentences combined with a propulsive plot push the reader along making the book harder and harder to put down.  Great worldbuilding combined with selective usage of tropes from crime and urban fantasy novels make this a unique, fun read.

But what really sets The Blue Blazes apart from the competition is its heart.  Sure Mookie is a big lug who does bad things to bad people.  That’s not so uncommon to read about.  What makes Mookie a great character is the great big heart inside this big scary guy.  His loyalty to The Organization and his boss; his love for his daughter; his desire to protect the innocents who get caught in the crossfire of this whole mess; these things give Mookie a depth that make him sympathetic and the story engaging on an emotional level.

It’s not all hugs and kisses, however.  Be prepared.  If you have problems with offensive language, or violence, this won’t be a book you’ll enjoy.  It’s big and bold and profane.  But if you can handle that, Mookie will take you on a ride to hell and back.