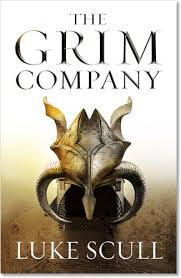 At first glance, The Grim Company appears to be a bog standard fantasy novel.  In a city state ruled by an ancient despotic mage, a disparate group of adventurers struggle to end his rule.  There’s a young man destined to be a great hero, a couple of grizzled barbarians, a troubled young woman, an underpowered mage, etc etc….

Fortunately Scull almost immediately sets about deconstruction of these tropes.  The gap between the young man’s mental version of his life and the actual version is comical.  The barbarian has a rich internal life.  The underpowered mage doesn’t power up and defeat all their foes.  He develops these characters somewhat slowly, but carefully.  They’re flawed, but still able to generate our sympathy and interest.

The plot itself is rapid and propulsive, as the group encounters numerous dangers and problems on the way to reaching their goal.  The climactic battle sequence is suitably epic, with plenty of carnage.  Despite the book’s length, it feels like a short quick read.

There were a couple of problems, though they are common to first novels and to the start of a series in particular.  Early in the book there’s quite a bit of infodumping.  While the information is necessary, the manner of delivery is awkward and interrupts what is otherwise a strong narrative flow.

The other problematic area is the lack of development of the female characters in the book.  While there are numerous female characters on all sides of the moral spectrum, most are underdeveloped with their plotlines seemingly leading nowhere.  Hopefully these plotlines will be developed further in the subsequent books in the series.

Despite these flaws, The Grim Company is an impressive first novel.  Scull has created memorable characters and a unique fantasy world that should only improve with subsequent volumes.  Highly recommended for fans of Abercrombe, Sullivan, et al.