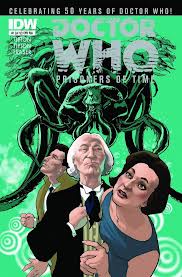 With the impending 50th anniversary of Doctor Who we are being treated to a variety of special treats celebrating the long history of the Doctor in his various regenerations.  This limited series is part of that celebratory overview.

Its premise is intriguing, if rather bold.  Each incarnation of the Doctor will have an adventure.  Each adventure will be connected, forming an overall story arc.

This first volume contains the first three issues of the series, featuring each of the first three doctors.  So far there is no obvious connective thread between the stories, except for the disappearance of the companions.

I’m no expert on the early incarnations of the Doctor, but the characterization of each seems to fit with what I know of each Doctor—the grandfatherly first Doctor, the weird second Doctor, the James Bond third Doctor.

Overall this volume is a bit difficult to evaluate. Since the storylines haven’t really come together, it’s difficult to tell where this series is going.  Only three issues in a collection seem more than a bit slight, my preference would have been for the series to be collected as a whole, or divided into two volumes at most.

Email ThisBlogThis!Share to TwitterShare to FacebookShare to Pinterest
Labels: comics, doctor who, idw