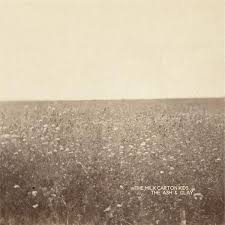 For better or worse (or possibly both), The Milk Carton Kids are lumped into the same category as Mumford & Sons, The Lumineers, etc.  From a marketing standpoint, it’s probably understandable.  Obviously Anti wants to sell records, & pitching The MCKs as a similar act hopes to siphon off some of the massive fanbases of those other acts.

When you actually listen to the music, however, the similarities end pretty quickly.  Both Mumford & The Lumineers are acoustic rock.  The bones of their music have more similarities to Coldplay than to anything from the folk music tradition.  The MCKs influences come fast & quick on listening… and the comparisons to folk acts are unavoidable.

Their harmonies remind me of Simon & Garfunkle.  Listen to the vocal interplay between the two vocalists.  The MCKs don’t seem to have Simon’s knack for pop hooks, or that 60s penchant for “relevancy”, but the sonics are the same.  The music itself brings to mind Gillian Welch.  Clearly these guys have been listening to David Rawlings.  The fills & leads sound as if they asked DR to sit in for a bit.

If anything, my major complaint with this record would be that there’s too much standing on the shoulders of giants.  It’s hard to cut away the influences & get to The MCKs own sound.  However, all the ingredients seem to be there.  This isn’t the career defining record.  But they have the potential to make some truly great recordings.