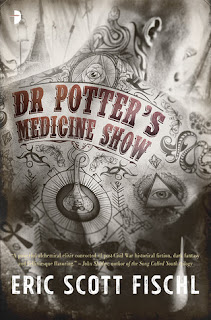 Some years back, David Milch rocked us with Deadwood.  Suddenly people thought that Westerns could and should be dark. And now they are.

Did I say dark? Wow, this book is dark.  I have to admit that perhaps it’s my own reading protocols. I thought of this book as a fantasy with some horror elements. I can see now that it’s really a horror novel, with some historical fantasy mixed in.

The book follows the titular Medicine Show around as they travel and use the sales of their cure-all as a means to conduct dark alchemical experiments. It’s gruesome stuff, and the cast of characters do not help. You are either evil or a victim. I kept waiting for a cowboy with a white hat to ride in & clean things up but it was obvious early that was not going to happen.

Now most of my reaction is on me, I’m just not the reader for that. I will say, however, that I thought there were tonal problems with the early scenes with the brothers Ag & Sol. Their early scenes were straight black comedy. Yet contextually it felt jarring rather than comedic relief.
Posted by Burgoo at 9:23 AM