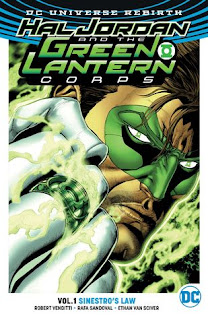 Wow. There’s a LOT going on here. The Green Lantern Corp has disappeared, Hal Jordan has some sort of proto-ring, and Sinestro and the Yellow Lanterns are running the universe. And that’s just the big picture.

And that’s the problem.  This book has so many characters, and so much going on, that it really feels overstuffed.

And for a Rebirth book, that is supposed to be attractive to new or lapsed readers, this is a huge problem.  Because I felt like I had no idea what the hell was going on. Of the various Rebirth books that I’ve read to date, this one felt like there was the strongest need to know deep continuity.

And yet somehow as it built towards Hal Jordan vs Sinestro, I felt like it was tired and in need of some fresh ideas.

The art was once again subpar. It’s a shame that on a book with such a cosmic scope they can’t put on some artists who can really bring the wonder.

I would say that this one is for serious GL fans only.
Posted by Burgoo at 3:15 AM