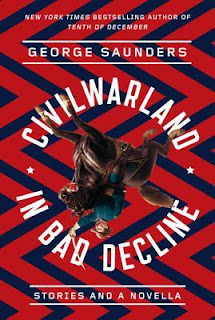 Thanks to the miracle of 21st century book giveaways I got my hands on this baby. It’s Saunders’ first book, a collection of short material.

Wow. I’m blown away and bit embarrassed that I had not read any of his stuff until now.

In the afterward, Saunders talks about writing this book while he was working a crap job. And when I say “while he was working”, I mean that he wrote it on the clock. Once I read this – and if you’ve ever had a crap office job you’ll know – so much of the book made total sense.

The America of CivilWarLand is tired and overworked. People are shady and deformed. But in spite of all this, there’s a sense of humanity throughout.  It’s a hard absurd world, but his characters keep trying.
Posted by Burgoo at 8:38 AM