Despite the Cover, Not just a Cold Weather story 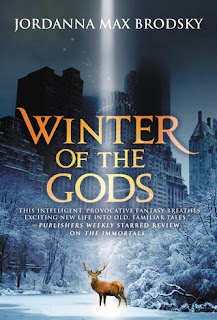 This is book two of a series, & yes, it is noticeable.  Despite some narration that attempted to bring the reader up to speed I found myself at a bit of a loss, at least early on.  Once this book found its footing that didn’t seem to be too much of an issue, except perhaps in a couple ways that I will address momentarily.

The overall setup is that Greek Gods still walk among us.  We just don’t know it.  They have more or less lost their powers (I assume that was explained in the first volume, because I don’t understand how or why) and are living as normal, but eccentric humans.

The twist is that ritual sacrifice of these gods can be used to generate power. So the old gods can get their powers back.

What we have is a typical Urban Fantasy structure that is close to being totally inverted.  Yes, there is a mystery to be solved. And yes, one of our protagonists is a detective of sorts. But the supernatural being is the female character, while the male character is the human sidekick/love interest.

On the plus side, this felt fresh and fun.  Playing by the rules of the genre with just enough trope inversion to keep things fresh.

The down side is that this is book two in a series. I felt like crucial character development was in book one and I was never going to actually understand some motivations. This made it difficult to be as invested in certain parts of the story.

On the whole it was a fun read. I’d certainly recommend it to someone looking for a fresh spin on the Old Gods in the Modern World subgenre.
Posted by Burgoo at 3:00 AM