Sky Was Yellow and the Sun Was Blue 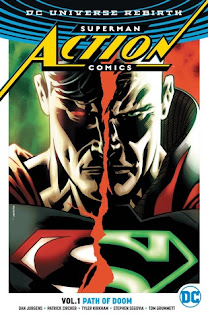 OK, he’s a Superman from some alternative dimension, and he’s married to Lois and they have a son. I know that some people are off right there. But if there was ever a superhero who felt natural being married & having a family, it is Superman.

Superman of New 52 universe (Super52) is dead. And so Superman shaves, puts on his costume, & goes to fight Lex Luther, who’s wearing his own “Superman” suit. In the midst of all this, Doomsday shows up, so now he’s got to fight Doomsday!

Look I hate Doomsday. And I’ve hated when the other Rebirth books bring out the primary antagonist for their arcs. (Lex Luther filling that slot here). But I found this to be a great traditional superhero book. There’s action, intriguing questions still unanswered.

Yeah, I want to read more of this please.
Posted by Burgoo at 9:39 AM