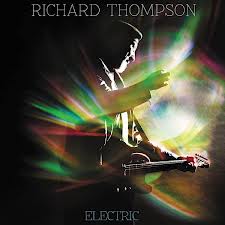 By my count, Richard Thompson has been recording for the last 45 years.  After a decade or so passes, how do you really evaluate his output?  He’s never had a prolonged spell as a recluse, with a big “comeback” album after 8 or 10 years.  He’s never been one to follow the fads of popular music – no electronica albums, or dance remixes.  He’s just quietly released consistently good guitar based recordings for years and years.

Electric sees Thompson working with another notable guitarist, Buddy Miller, in the producer’s role.  Miller’s production techniques have changed considerably since the quasi Daniel Lanois murk that he generated on those Emmylou Harris albums.  Now he’s going for a simpler almost minimalist approach.  The production gives an almost analog vibe to the recording.  It takes a back seat to the songs themselves.  Of course this is the approach that seems to work best for Thompson’s music.  Some of his 90s recordings ended up too muddied for his aesthetic.  When your guitar work and songwriting are the core of your music, production that distracts from these elements is a diversion at best.

Strangely enough, for a recording titled Electric, this is not Thompson’s version of Shut Up & Play Yer Guitar.  There’s plenty of guitar here, of course, but it’s always in service to the song.  There are no extended solos or instrumentals.  Just quality songs.

Often I find that Thompson’s songs take multiple listens to really sink in.  That being said, early on my favorites are the acoustic numbers.  “Saving the Good Stuff For You” in particular stands out as a future classic in his repertoire.

Electric may not be another Bright Lights or Pours Down Like Silver, but it is a very worthy addition to his catalog.

Email ThisBlogThis!Share to TwitterShare to FacebookShare to Pinterest
Labels: album of the week, music, richard thompson