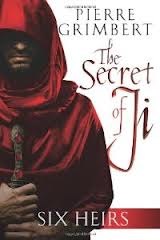 My curiosity was raised when I read that Grimbert’s Ji series was a bestseller in France.  My experience with French SFF has been limited to some comics and archaic Arthurian texts, so I wanted to see what Grimbert had to offer.  Unfortunately, Six Heirs doesn’t offer anything that can’t be easily found here in America.

The setup is good, and out of the ordinary.  Several generations earlier, a stranger traveled to all the various kingdoms & requested that they each send a representative to the small island of Ji on a particular day.  When the day arrives, the assembled representatives go off with the stranger, & seemingly disappear.  Eventually a small group of surviving representatives return, but refuse to discuss where they went or what happened.  Their descendants create a tradition of gathering every few years to honor the memory of their ancestors, and to celebrate the extended family that they have become.   In the present day, on the eve of one such gathering, a murderous cult begins assassinating the titular Heirs of Ji.  As they try to avoid the assassins, the small group of survivors gathers together to attempt to determine exactly what is going on.

Despite the premise, the execution of Six Heirs comes off as something that you feel like you’ve read before.  This is in part due to the reliance of well-worn tropes in the story and characterizations.  The setting is solidly faux European, with many small feudal states that don’t really feel differentiated.  The characters themselves fall into near cliché.  We have the mage (Corenn), the barbarian (Bowbaq), the rogue (Rey), the warrior (Grigan), and the young people (Leti & Yan, who do double duty as the romance subplot).  None of this is particularly well differentiated from piles of cookie cutter fantasy that you have probably read.

Concerning the prose itself, I was underwhelmed.  It is workmanlike and functional, but nothing more.  That may or may not be a function of the translation.  If anything it reminded me of the numerous Tolkien clones published in the 1970s.

It’s also worth noting that Six Heirs does not really function as a standalone novel.  By the end of the story, Grimbert gives us no resolution to any of the primary plot points or character arcs.  In this regard, Six Heirs seems to be more of a multipage introduction to the series than an episode.
At its best, Six Heirs is a functional enough epic fantasy for a YA reader.  Fans of Eddings, Brooks, etc may very likely be intrigued by the story of Ji.  A reader looking for more sophisticated storytelling will be disappointed.