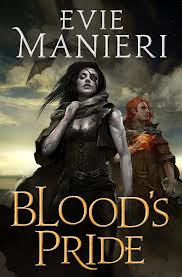 Evie Manieri describes herself as a fan of intricacies.  I would describe the plotting of The Wire as intricate, where certain actions don’t pay off for 1 or maybe 2 seasons.  Blood’s Pride must be a whole other sort of intricate, most likely meaning cramming as much as possible into a single story.
The story of Blood’s Pride takes place a generation after the city state of Shadar is conquered by the seafaring Norlanders.  The Norlanders have come in order to control magical ore which can only be found in Shadar.  Needless to say, the people of Shadar are not happy about the brutal rule of the Norlanders, and Blood’s Pride is about their attempt to overthrow the rule of the Norlanders and regain control of their own city.

Before getting into some of the problems of Blood’s Pride, let me mention a couple of things that worked well for me.  First of all, Manieri’s overall vision is admirable.  She has envisioned a fantasy that is different from the norm.  Sure, some of the characters do fit some familiar tropes – the mixed blooded outsider, the slave who is really a secret king, etc.  But the overall storyline of a city fighting back against foreign oppression is not one commonly told.  Secondly, she does a good job with the pacing of her story.  I found myself being pushed forward to the end of the book quite rapidly.  In a new fantasy world, she doesn’t waste time on info dumps or other long expository passages, but focuses on plot development instead.  This means that in spite of the flaws of the book, it is an entertaining read.

But there are some problems with Blood’s Pride as well.  Some of them are logical, and there may be explanations that work that we simply haven’t received yet.  For example, how is a culture that can’t be exposed to sunlight an effective expansionistic empire?  Wouldn’t that whole “sunlight kills them” thing be a very effective natural deterrent to their activities?  Another culture is split between living in the desert and at sea, yet has members who are gingers.  As a ginger myself, I can tell you that neither boating nor desert excursions are things that gingers are well suited for.  While she packs plenty of cool ideas and details into the book, most of them create more problems than they solve, once you begin to examine them.  For example, how do they transport those huge flying animals on ships?  Why use the ships if they can fly?  How does that magical ore make those swords?  And if they bring the blood south to pre-bond the swords, how are they transporting that much blood in a world without refrigeration?  See what I mean?  Now this is only the first book of a trilogy, and many of these problems may be resolved in the later volumes.  But it is a bad sign when this seems to be a trend in only the first book.

A more significant problem is the development of the characters.  There have been some complaints about her naming conventions, with readers saying that they found it difficult to follow.  I don’t think that the problem is with the names, per se.  Rather it is with the character development.  Blood’s Pride has a rather large cast of characters, and unfortunately they are thinly developed at best.  What’s happening is that readers are confused by shifting perspectives on the story due to the lack of character depth.  The tangible thing that they can latch onto is the names, but the real issue is the lack of in depth character development.  The names themselves are no stranger than bog standard fantasy names.

I thought that Blood’s Pride was an entertaining read with a fast paced plot and an unusual fantasy world.  Unfortunately that was overshadowed by the author’s tendency to cram too much into a single volume.  Not only are there too many loose ends in the world building, but character development has also suffered as a result.  It doesn’t matter how many “oh cool” ideas or moments are in the story if the reader isn’t invested in the characters.