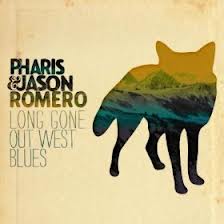 Back a hundred years ago & more, before the advent of recorded music, parlor music was a popular pastime.  As hard as it may be to believe today, at the time thousands of regular people played musical instruments.  They would gather in their parlors and sit and play the popular songs of the day.  Some of these were traditional folks songs, others were pop songs specifically written for that market.

Now in the 21st century, changes in recording and performance technology have made created a small resurgence in the genre.  How else can you consider the indie folk releases from Iron & Wine, for example?  Once these songs couldn’t be performed for an audience, simply because the audience could not have heard the performers.  Now the smallest sounds can be transmitted to the back of a venue.

Long Gone Out West Blues is the second release simply under the names of Pharis & Jason Romero.  While their earlier recordings as The Haints string band came more from an old time dance tradition, these last two releases are firmly within the parlor tradition.  By its nature this is intimate music.  Its strengths are subtle ones – the interplay between two instruments and two voices.  As the guitar and banjo intertwine, there is a corresponding meeting of the two voices.  They are apart, then in unison, then changing again.

It’s a mistake to misjudge simplicity to mean the same as simple.  The difficulty, as well as much of the beauty, comes from subtleties that can easily be overlooked in a fast paced digital age.  Sit down, have a glass of tea, let the music embrace you.

Email ThisBlogThis!Share to TwitterShare to FacebookShare to Pinterest
Labels: album of the week, music, pharis and jason romero