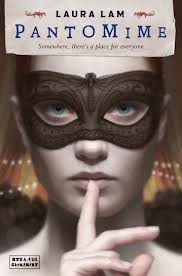 A quick disclaimer:  I’ve never been much of a YA reader.  But with the growth of the genre, I’ve checked out a few things & have been pleasantly surprised.  Pantomime, however, seems much closer to the core of the genre, & as such I’ve had some problems.

It’s very difficult to discuss any sort of plot points without dropping massive spoilers.  The majority of the book centers on Micah, a teenager who has run off to join the circus.  In the background we have vestigial technology from a former civilization, as well as hints at mythology which provide clues to Micah’s identity.

The prose in Pantomime is gorgeous.  Evocative and fleeting, Lam proves herself as a wordsmith.  Additionally she does an excellent job of characterization.  While the cast of characters is relatively small, there is nice development of each of them, with each character having distinctive voice and motivation.  Additionally, I really enjoyed her approach to world building.  Rather than having long infodumps, Lam parcels out the history of the world piece by piece, slowly adding information and creating mysteries to be solved later.

My problem comes with the central conflict in the book.  At its heart, Pantomime is about Micah’s journey of self-discovery.  Micah is slowly building a personal identity that is independent of the one that had been received.  It’s all very well written, and surely central to the core of YA.  But as a reader, it’s just not a conflict that I find compelling.  Since this is so central to the book, I wouldn’t recommend this to someone, like myself, who is not heavily into YA books.
Posted by Burgoo at 11:17 AM