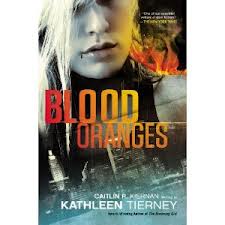 First things first:  Kathleen Tierney is the nom de urban fantasy of author Caitlin Kiernan.  Ms Kiernan is an extremely well regarded stylist, who primarily writes in the vein of “the weird”.  She has been nominated for the Bram Stoker Award, the World Fantasy Award, & the Locus Award, among many others.

The plot is bog standard urban fantasy.  Monster hunter Siobhan Quinn is bitten by a werewolf, then saved and bitten by a vampire, the Bride of Quiet, who intends to use Quinn for her own nefarious purposes.  Being a sassy monster hunter, Quinn doesn’t take kindly to this idea, & starts looking for answers and revenge.

On one level this is a breezy, if gritty, urban fantasy.  Quinn’s quest for answers and revenge pushes things along at a brisk pace.  The writing is very accessible, and suitably quippy for the genre.   What is ultimately more interesting is how Tierney uses this plot as a platform to deconstruct urban fantasy novels.  Quinn is absolutely not a Mary Sue.  She’s a homeless junkie who just accidentally got involved with monster hunting.  She’s not sexy (unless you like shark eyes, piranha teeth, & bits of blood and gore in someone’s hair).  She’s really not very good at it, and seems to succeed more from dumb luck than anything else.  The various supernatural characters are likewise not sexy, or protective, or anything remotely resembling some sort of potential life partner.  Instead, they tend to be horrific, with their own thinly veiled agendas that clearly are not in line with Quinn’s best interests.

A word needs to be said about the actual writing in Blood Oranges.  As Caitlin Kiernan, she is known for beautiful, at times rather ornate prose.  In her guise as Kathleen Tierney, she abandons this entirely.  Blood Oranges is told from the POV of Quinn, a junky and runaway who presumably hasn’t attended school since the age of 12.  The prose style reflects this character.  It is coarse and at times simplistic, but then that’s the point isn’t it?

Blood Oranges is a boot to the head of urban fantasy.  An angry, blood stained rebuke to the writers of simpering sparkly vampires and faux heroic heroines who love them.  It’s a blast of punk rock attempting to cleanse the airwaves from bloated soft rock balladry.