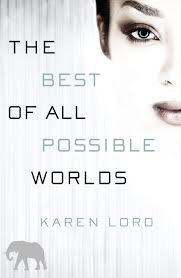 Ultimately this is a book about optimism.  Characters struggle and suffer, bad things happen, but the possibility for growth and happiness exists.

The plot is fairly simple.  Following a genocidal attack, Sadiri refugees on the planet Cygnus Beta are struggling to continue their existence as a distinct culture.  Their fundamental problem:  most of the women were killed in the attack, leaving the refugees with an extreme imbalance of male survivors.  In order to find an appropriate pool of potential brides, a joint delegation from the Sadiri community and the Cygnus Beta government travel around the world, visiting various locales in order to gather genetic samples.

Lord’s story centers on two characters:  Grace Delarua and the Sadiri councilor Dllenahkh.  She’s warm and empathetic.  He’s cool and cerebral.   You can guess how it goes.  (But that’s OK.  Sometimes judicious usage of a trope plays off well, and this is one of those cases.)  Delarua is the primary POV.  Her personality shines through and builds the tone of the book.  Delarua’s empathy ensures that we are invested in the characters and through them in the small personal story that Lord tells.

Lord makes an interesting choice in TBoAPW.  Events that would be the core of most SF books are somewhat marginalized, and occur in the background. The destruction of the Sadiri home planet, kidnappings, the investigation of slavery, the prosecution of a telepath who has been manipulating others; we see the events only in the aftermath as they play out in the lives of our small group traveling around Cygnus Beta.

And so back to optimism.  We see the aftereffects of these various disasters and problems, but the focus in on overcoming them.  Rather than dwell on the negative, Lord gives us a story of survival and ultimately triumph.  We are given a tour of a world that has its share of problems, but are left feeling that these problems are solvable, and that ultimately it is possible to not just endure, but to create better lives.

The Best of All Possible Worlds is an outstanding novel, and quite frankly so accomplished that it is difficult to believe that it is only Lord’s second novel.  It’s rare to read such a humanized story of interstellar colonization, and rarer still to read one so polished.  It’s sure to be one of my favorite reads of 2013.