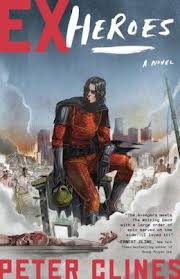 While superheroes vs zombies seems like some sort of satirical sendup of Hollywood, the concept does capture something in the zeitgeist of the 21st century.  In fact I’m somewhat surprised that we haven’t seen a series of movies on SyFy featuring this theme.

In Peter Clines’ debut novel, he goes all in on the genre tropes.  The story takes place after the zombie apocalypse.  A small group of superheroes and a larger group of normal humans have taken shelter on a converted movie studio lot in Los Angeles.  They’re trying to survive, but in addition to the millions of swarming “exes” (Clines word of choice instead of zombie), they are also menaced by the remnants of a street gang who want the weaponry the superheroes have access to.

The strength of Ex-Heroes lies in the pacing and action sequences.  With so many constant threats to survival, there are plenty of opportunities for heroics.  Zombies to kill, humans to rescue, evil gangbangers to overcome.  Clines does a good job of taking a story that seems to fit more naturally into a comic format & convert it into a novel.

The weakness of the novel lies in the characterizations.  Clines chooses to basically simply file the serial numbers off several famous superheroes.  This approach is fine, but even the flashbacks used to establish the heroes identity before the outbreak are not enough to make me really care about any of the characters.  This diminishes the stakes significantly.

In short, while a quick & fun read, Ex-Heroes was on the whole disappointing.  I wish I’d read the graphic novel instead.