Well it's no 87th Precinct 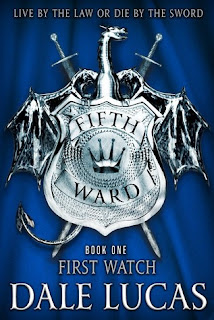 First Watch is clearly the first installment in a new series, and as such Lucas is trying to set up the pieces for longer storytelling.  The city is then one of the major characters, and we spend quite a bit of time learning about the city and its dynamics.

It’s part police procedural, part buddy cop story. You’ve got the new guy who is partnered with a grizzled veteran who wants nothing to do with him at the start of the story. It’s a fun useful trope, and it works again in this context.

The central mystery could be a bit beefier, while the characterizations are central, a bit more of a plot would have been a good thing.

I’m wondering if we are starting to see a trend towards this light hearted, borderline comedic fantasy as a reaction to the grimdark stuff that dominated the field in the early part of the millennium. This certainly has more in common with 48 Hours than with Straw Dogs in terms of tone.

This was a fun read, by an author who is new to me. I’m curious about the rest of the series.

Thanks to NetGalley and Orbit for a review copy.
Posted by Burgoo at 9:18 AM