Have you met my sister? 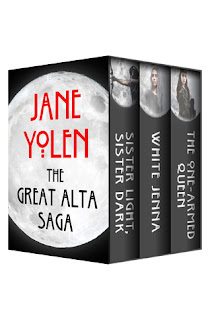 Right off the bat I need to mention that these Open Road collections are great deals. They seem to usually be 3 older titles (such as an entire trilogy), packaged together for a sweet price.

This particular series includes the titles Sister Light, Sister Dark; White Jenna; and the One-Armed Queen. Together they tell the beginning, middle and postscript of a war where a small group of female monks led the resistance against a foreign government. There’s prophecy, a hero’s quest, magic, romance: all the things you expect from epic fantasy.  And for books written in the late 80s & early 90s, there are some surprisingly modern stylistic flourishes.

Still, overall these are read reads, and given the current interest in feminist SFF, timely as well.

Thanks to NetGalley and Open Road for a review copy.
Posted by Burgoo at 3:58 PM