I Call This a "Lazer" 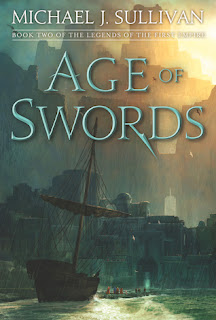 My friend tells me stories about a guy he knows: the guy is just smart enough to have some good ideas, but not smart enough to realize that someone else had that idea a long time ago. Or maybe to overlook an obvious flaw in his thinking (such as the flame toilet that was made of wood).

Age of Swords is the second book in Sullivan’s Legends of the First Empire series. It’s a sprawling prequel series, set long long before his earlier books. (It’s actually rather brilliant: he is avoiding the usual problems with prequels by having his prequels set so far before that spoiling is more or less irrelevant.)

Basically we’ve got a situation where a huge war is about to erupt, with the elves fighting against all the other races (except the giants, at this point). We have multiple factions of humans working with some dwarves and renegade elves.  We’re at one of those mid points in a series, where the big action sequences aren’t happening yet, but he needs to get some dramatic action as pieces are moved into place.

To Sullivan’s great credit, his storytelling chops are strong enough that it really isn’t much of a problem to keep the pages turning.

My only real complaint is that the very small group of primitive humans contain multiple prodigies. We have a culture that does not have much sophistication in technology or social relations.  Yet somehow our characters are making significant breakthroughs all within a brief window of time. And not just to create their own inventions but also to duplicate or incorporate those of others into their concepts.

I know, this is the type of book where you just need to put those sorts of reservations by the door. And no matter my reservations, this was a very enjoyable book. Sullivan spins a great yarn, and the pages kept turning and there was a smile on my face the whole time.

Thanks to NetGalley and Del Rey for a review copy.
Posted by Burgoo at 3:39 PM